Spacehook and blogging are two very different things. I like my job, but I miss having the energy to peruse all the blogs I enjoy, and write long posts myself. I miss being able to do the Friday Five on Friday. Everyone who still comes over here faithfully to check on me, thank you. I miss y'all. I'm fine, I just have to go to bed now. Sleep well, friends.
Posted by zorra at 10:24 PM 20 comments:

A dear friend of thirty-seven years' standing wrote to me of his concern that President Obama "is moving America towards economic ruin in order to establish a socialist regime and eventually a dictatorship". He could not have been more serious.

I am stunned that a person I have known and loved for decades could believe such a thing. These days I don't have the mental energy after work for sustained debate, much less to deconstruct piece by piece all of the proof-texts he sent me from The Audacity of Hope that "prove" Obama is "really" a Muslim (implication: we're all gonna die). I just told him that I believe the President is a brother in Christ and that he seeks God's guidance in one of the hardest jobs on earth. I sent him a couple of pertinent references from Snopes.com (which, I have learned, convinces no one whose mind is already made up).

W. and I have always been able to talk about everything, but it looks like that just changed.
Posted by zorra at 8:54 PM 10 comments: 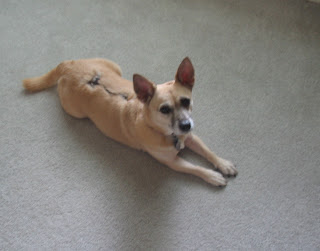 Here's the newest member of our household! Sugar is a small, very sweet dog that was rescued from a shelter by my friend C's mother, probably about eight years ago. The dreadful scar on her back is where some lowlife apparently poured some sort of acid on her. Amazingly, she is a friendly, trusting dog, and is well-behaved. C's mom has Alzheimer's and is in a nursing home, and C and her family have been keeping Sugar for four or five years now. They already had another dog, and for various reasons keeping two dogs has been a financial hardship. Back when Amie was still living I told C we would be willing to take Sugar some day. Well, after Amie died we got Riley...then we got Lena...and I felt more and more like I had made a promise I wasn't keeping, to one of my oldest friends (we go back to the late '70's).
The Scientist and I have been talking about maybe getting a second dog, and I made the big mistake of going on my favorite cattle dog rescue site, looking at all the available heelers, and getting really interested in several. But the issue of Sugar kept nagging at me, and last weekend I called C and said, let's try it. So Sugar and her paraphrenalia arrived on Monday night. Riley grouched and grumped a few times at first, but they have been coexisting peacefully since then.
No, she's not a heeler, but she's a sweet girl who needs us. On her head she has a horrid cyst or tumor of some sort, which is coming off tomorrow. Sugar is a Velcro girl who follows me all over the house, and is picking up on our household routines very well. She just wants to love and be loved. That, we can manage. 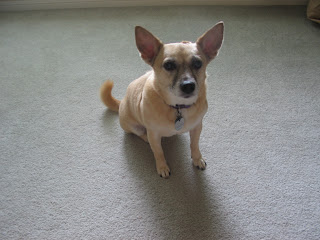 The master bath is finished!

Fabulous, humongous shower for two, before: 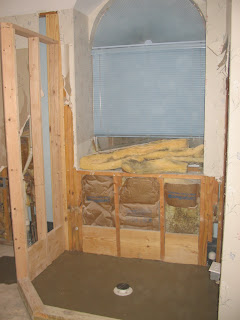 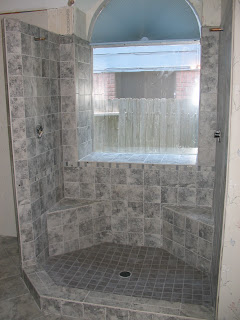 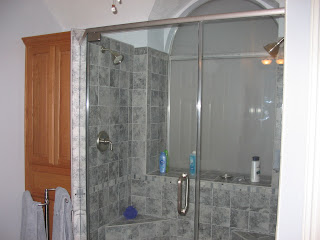 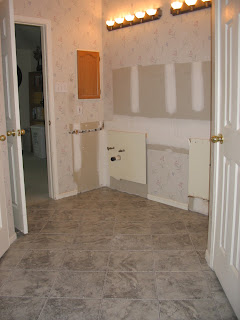 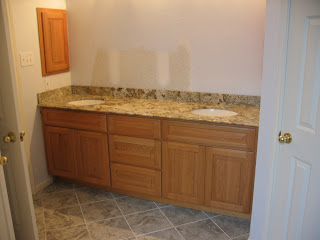 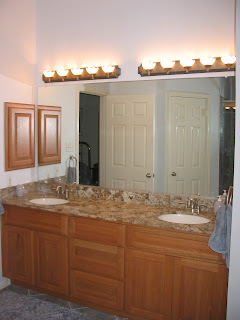 Songbird invites us to list five things we love (or don't!) about summer. Easy!

1. The food! Sweet peaches, berries, cherries, and--best of all--our very own backyard tomatoes. Nothing can compare with those.

2. (A corollary to #1) Grilling! And not just meat, delicious as that is. I'll post a fabulous grilled squash salad recipe later today.

4. The hypnotic call-and-response of the cicadas and peepers on summer evenings.

5. Summer music--reminds me of younger years, when summer really was a carefree time. "Hot Fun in the Summertime" will be playing in my head for the rest of the day.

Honesty compels me to add that there are two things I absolutely detest about summer:

1. Humidity! And regardless of where you live, if you've never been to Houston in August, trust me, you DON'T know exactly what I'm talking about...and...

So I have just completed my first week at my new job, and I am worn out, overwhelmed with new information, but very glad I made the change. I am working for a large (VERY large) national mental health managed care company as their new Autism Specialist. Many states have now mandated coverage of autism treatment, and insurance companies are scrambling to catch up. So are many parents and treatment providers, who have not had much of an opportunity to have intensive autism treatment like applied behavior analysis (ABA) covered by insurance before.

The last time I worked as a mental health care manager, fifteen years ago, the managed care atmosphere was very different, and I left because all of the jokes about my going over to the dark side of the force were finally too close to the truth for me to laugh. In those days care managers really were pressured to limit and deny treatment as much as possible. I'm glad I decided to take this job, though, because everyone I have met this week seems compassionate, positive, and very concerned to help people get the best possible use of their mental health benefits.

Because I was an in-network provider with this company for well over a decade, a lot of the care advocates already knew my name and have said things like, "I've been referring people to you for years!" My closest coworker and mentor here is a care advocate that I've been on a first name basis with for about ten years, from all the times I submitted treatment requests to him--but we had never met face-to-face before my interview.

I had not been planning to leave my old job, but I realize now that I've been phoning it in for a while and was more ready for a change than I knew. This is a totally different situation, and a welcome new beginning.
Posted by zorra at 11:41 PM 9 comments:

Is anyone still out there? I have a lot to tell. First of all, Lena has a forever home! (more of that in a moment)

Aaand, we spent a week dawdling around the British Virgin Islands on this magnificent vessel.

And then...I found a new job, which starts on Tuesday. (That was the unbloggable.)

And last week...we had a great meetup with RevDrKate and her new husband (don't you love the sound of that, Kate?) R at one of our favorite restaurants.

And on top of all of that, we are in the throes of completely remodeling the master bathroom.

But first things first. Lena was adopted by a very nice couple with two young children, who fell in love with her at an adoption fair. All was going well until they observed that their daughter was breaking out in welts whenever Lena licked her! The rescue coordinator and I were so discouraged...then the family reported that they were going to make this work, and would try to teach Lena not to lick the child. Lena is quite a licker, so please pray that somehow this will work for sweet Lena and her new family.

(Edited to add:) Well, I just found out that Lena is back on Petfinder. Apparently she couldn't stop licking (no surprise there). I am thankful they loved her enough to bring her back to the rescue coordinator, who loves her too and will keep her safe until she's adopted again. So if you are praying for sweet Crystal girl to find her forever home, please add a prayer for sweet Lena girl too.
Posted by zorra at 5:25 PM 5 comments:

Spiritual Renewal Weekend is over, and although the turnout was smaller than I had hoped, it went very well. I am worn out, and I'm sure I'm not the only one. So many people worked so hard to support this weekend. I confess that for so long I just looked forward to the moment when it would be over...now I can see how the Spirit carried it, the whole time. Why do I ever worry about these things?

The Scientist is at a conference in Florida, where he is giving a talk tomorrow. Last night there was a pirate-themed wedding at the resort where he is staying. Wonder who married the happy couple? And what would he/she say? "Arrrrr, I now pronounce ye sailor and wench"?

Lena spent yesterday at an adoption fair, where two families took a great interest in her. The rescue coordinator told me that one family spent about an hour petting and playing with her. Both families took the coordinator's business card, said they were going home to talk about it, and wanted to be sure Lena would be at the same event next Saturday (she will). Prayers, please!

And prayers, please, for the people who have suffered and lost loved ones and homes to yesterday's tornadoes in Mississippi and Alabama, especially in Yazoo City, where my mother graduated from high school. When you are driving through my Delta homeland headed for Jackson, Yazoo City is where the Delta's tabletop suddenly meets rolling hills, lush with kudzu in the spring and summer. There is a cafe in Yazoo City called Stubb's where one can enjoy the best chocolate chess pie on this or any other planet. Jimmy Carter held a town hall meeting at Stubb's during his presidency. Yazoo City is also the home of Willie Morris, whose essays I have enjoyed, and who died the day before my father died (odd thing to remember, I know). I no longer know anyone in Yazoo City, but I feel as if tragedy has befallen a friend.

And I have a great big unbloggable (a good one, which is unusual for unbloggables) on the horizon too!

Six more days until vacation, but until then, everyday life goes on...pardon me now, while I go to find the plunger and unstop one of the toilets, before heading off to session meeting....
Posted by zorra at 4:26 PM 7 comments: